Drawings I made at age five.

I believe that all people are creative. I know many disagree with that – often it’s the people who think they themselves are not creative. But creating simply means bringing something into the world that was not there before – it might be a drawing or a song, or a mathematical proof, or the execution of a football play, or just a solution to a problem.  Creativity is part of being human. The idea that we are “not very creative” is a story we tell ourselves, and it is false.

I’ve always taken a special interest in children’s drawings – not just my own or my children’s. Nearly all children begin to draw at some point in their development; it’s a preliterate form of expression that has been with our species since before we invented an alphabet. Before adults begin to interfere with the process, all children – not just the “artists” among them – have a natural sense of composition and form. Ironically, it’s when formal instruction is introduced that children tend to lose that innate sensibility, and trying to get their drawings “right” is something that cuts them off from their own creative powers. 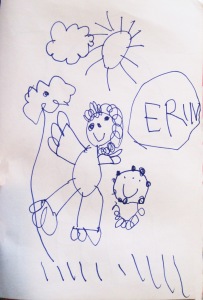 Another of my drawings from when I was five years old.

Last month I was at the local art museum with Mike and the kids and we went to visit the water fountain at the same time that a school group was there drawing the fountain – I would guess they were about second or third graders. I was surreptitiously watching them draw for a few minutes, though it seemed most of them had finished their pictures by the time we arrived. The students whose drawings I loved the most had a kind of confidence and immediacy to them – some done quickly, some undertaken with more care and time, but the best ones to me all possess a sense of freedom and uninhibitedness that can’t be faked.

I saw one girl, on the other hand, who had drawn a few timid lines, looked around at her neighbors, caught me watching her, and began to furiously erase her work until she literally ripped a role in the paper. Past a certain age – maybe kindergarten age? – I think there are always a few of these types of kids in any group. Sometimes they are in fact the Artists of the group who have been singled out by parents or teachers as being “good at drawing,” but sometimes they are at the other end of the ability scale, the ones who have noticed or had pointed out that their drawings don’t look as good as the other kids’.

Later that day when we were in the kids’ art space at the museum, I gestured to the wall of children’s drawings, things that had been done there in the museum and pinned up, and asked Mike to guess which one I liked the best. It wasn’t the most realistic, the painstakingly “shaded” close up of a flower, the most technically advanced, the one that probably 9 out of 10 kids or adults walking by would instantly pick out as best. It was a delightful still life, done in a simple line drawing style, terrifically out of proportion, the perspective nothing close to reality, but it was alive, and made perfect sense in its own little world on the page.

That drawing had the sort of energy that most adult artists try to tap back into for the rest of their lives. When I was a freshman at RISD, my first semester drawing teacher had us sit and scribble in large newsprint pads for the first 20 minutes of every class. We were not to draw anything representational or try to make it look “good,” whatever that might mean. When I was 18, frankly, that exercise was baffling and frustrating to me – I was there to make “good” drawings, why was I scribbling? – but now I totally understand it. To make something good, it must be real, and to make it real, you must let go of making it good. It’s at the heart of why early childhood drawings are so fantastic. They are not focused on making Art, they are purely making.

I’ve decided to write on the theme of creativity in this blog for the month of March. It’s something I’ve been thinking about quite a bit lately. Right now I am still reading and doing the 12 week course for The Artist’s Way and at the same time have also been reading Sir Ken Robinson’s The Element: How Finding Your Passion Changes Everything. There is considerable overlap between the two books so it’s been fascinating to read them simultaneously. At the heart of them is the idea that tapping into your passion – whatever form your personal expression of creativity takes – is to tap into your authentic self.

One thought on “A Month on Creativity”